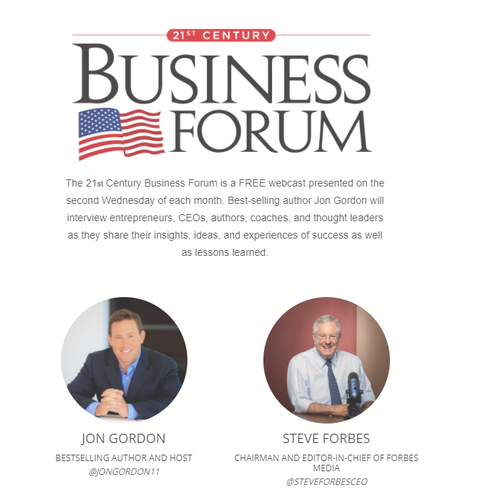 The 21st Century Business Forum is a FREE webcast presented on the second Wednesday of each month. Best-selling author Jon Gordon will interview entrepreneurs, CEOs, authors, coaches, and thought leaders as they share their insights, ideas, and experiences of success as well as lessons learned.

January's special guest is Steve Forbes! Steve Forbes is chairman and editor-in-chief of Forbes Media. His latest project is the podcast “What’s Ahead,” where he engages the world’s top newsmakers, politicians and pioneers in business and economics, challenging traditional conventions as well as featuring Steve’s signature views on the intersection of society, economic and policy. A widely respected economic prognosticator, Forbes is the only writer to be a four-time winner of the prestigious Crystal Owl Award, honoring the financial journalist whose economic forecasts for the coming year proved most accurate.